One day Pasquale decides to change his name, he becomes Tony.
Born in Bari, Madonnella neighbourhood, aged 9, in the mid-sixties he migrated with his family to the US and grew up like a true American. Rockabilly and hot dogs included. He never returned to Italy till the day when, at that point a professional taxi driver, an anti-immigration blitz at the Mexican border forced him to choose: jail in Arizona, or deportation to Italy for 10 years. His crime? Smuggling illegal migrants into the US, on board his taxi.Tony opts for deportation.
Back in Italy, with his American dream laying in pieces, he’s completely alone in what he defines “another planet”,  a small, still Country with no opportunities.
On the desolating backdrop of where he lives next to the motorway, Tony still wears his cowboy hat and doesn’t  seem willing to give up… 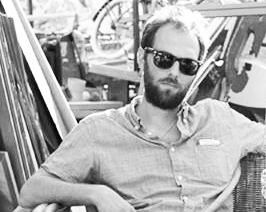 Ascanio Petrini was born in Bari. He graduated at Bologna University in Cinema  and studied Direction at the Accademy of Cinema and  Television “Griffith 2000” in Rome. After working on various film productions, he shot as director the documentary “Salva la Cozza” an ironic and amusing investigation on  the old and traditional passion for row fish in Bari. Selected in numerous the film has been a  great audience success.