Daniele is a young man from Sant’Erasmo, an island on the edges of the Venice Lagoon. He lives on his wits, isolated even from his peer group who are busy exploring an existence of pleasure-seeking expressed in the cult of the barchino (motorboat). This obsession focusses on the building of ever more powerful engines to transform the little lagoon launches into dangerously fast racing boats.
Daniele too dreams of a record-breaking barchino, one that will take him to the top of the leader board, but everything he does to further his dream and win respect from the others turns out to be tragically counterproductive. The decline that erodes the relationships, environment and habits of a rootless generation is observed from the timeless perspective of the Venetian landscape and its island outskirts: the point of no return is a foolish, vestigial tale of male initiation. Violent and destined to fail, it explodes dragging the ghost city along on a psychedelic shipwreck. 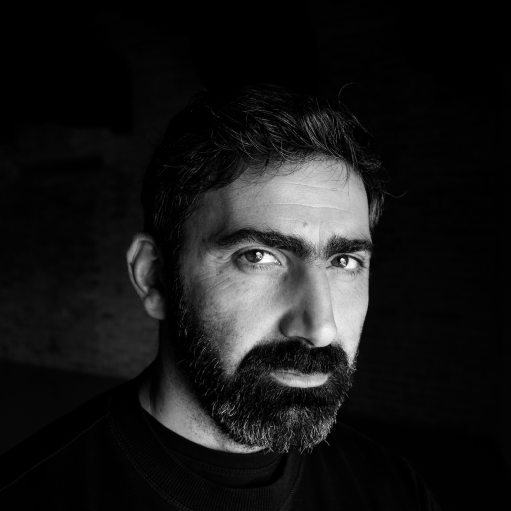 Yuri Ancarani (Ravenna 1972), is an Italian video artist. His works, which combine elements of documentary cinema and contemporary art, aim to explore aspects that go unnoticed in everyday life. His way of focusing and using the camera with meticulous precision creates his distinct aesthetics, marked by the sculptural depth of the shots and of video works that investigate the hidden elements of daily life and of social codes. His works have been presented in numerous exhibitions and museums in Italy and abroad, including the Fondazione Sandretto Re Rebaudengo (Turin), MAXXI (Rome), the Hammer Museum (Los Angeles), and the Guggenheim Museum (New York). In 2016 his feature film The Challenge won the Special Jury Prize at the Locarno Festival.

Atlantide is a film that began without a screenplay. The story developed over four years of observation following these young people, their dialogues are taken from their very real lives. This working method gave me the opportunity to go beyond the limits of traditional film design:  where first there is writing and then shooting. This way, the film was on hand to record a moment of great change for Venice and her lagoon, from an almost undetectable perspective, one attuned to the outlook of these adolescents.
The intent to experience their lives up close, and in their boats, made all the rest possible: the film slowly created itself.